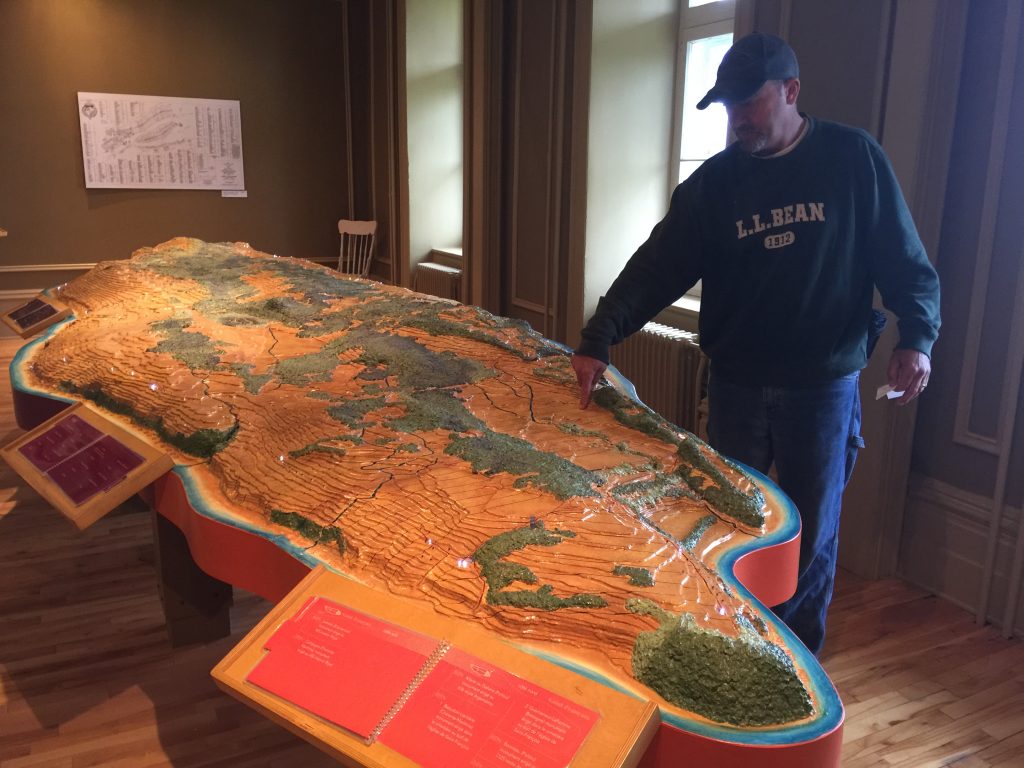 The 9th great grandfather of Jim Dumas (son of Donna Vermette), Antoine Vermet-dit-Laforme is said to be the ancestor of virtually every Vermette, Vermet, and Varmette in North America. 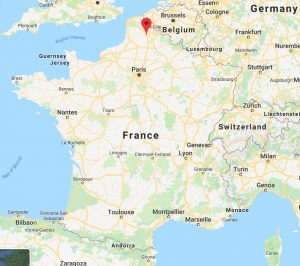 Antoine was born about 1636 in the city of Arras, France, the son of Fleury Asquet Vermet-dit-Laforme[mfn]Translated loosely to “called” a dit name was an alternate name that was added to the family surname. You will most often see dit names used in New France, France, and Scotland. Read more about Dit Names: https://www.thoughtco.com/what-is-a-dit-name-3972358[/mfn] (1606-1669) and Marie Leblanc (1620-1690). Founded in the 4th century, Arras is located in Northern France, although at the time Antoine was born until he was a 4-year-old boy, Arras was part of the Spanish Netherlands. Arras was captured by the French in 1640 during the Thirty Years’ War.

As in many European cities, it is possible to walk through Arras today, past buildings Antoine would have also walked by as a child. Unfortunately, many were destroyed by the French Revolution and both World Wars, but a popular remaining historical site that would have been familiar to Antoine is the town hall and belfry tower (construction completed in 1554) and also many of the historical houses on what is known as the Grand Place, many dating from the 17th and 18th centuries, although the oldest house on the grand place dates from 1467. 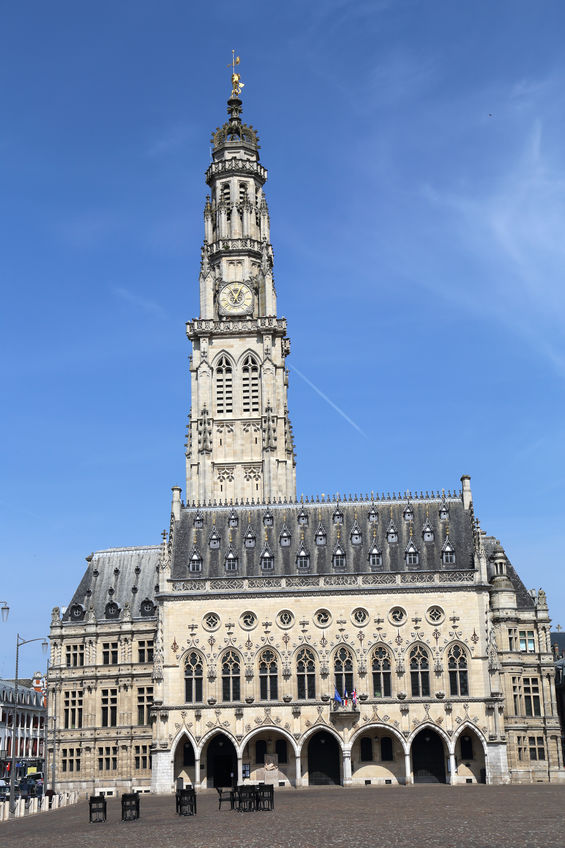 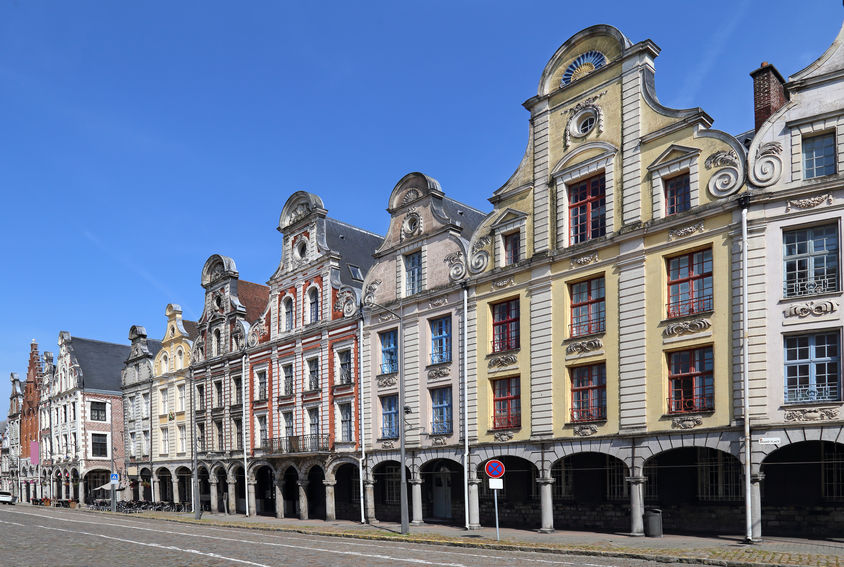 Historical houses on the Grand Place in Arras, France

We know that Antoine was in New France (the French colony in Canada) by 1669 and it is believed (although unproven) that Antoine Vermet was a Carignan Soldier in the Grand Fontaine Company of the Poitou Regiment stationed at Blaye, Gironde; Aquitaine in France. In 1665, King Louis XIV ordered the Carignan Soldiers to New France to help save the colony from destruction by the Iroquois. Antoine’s Company, commanded by Hector D’Andigne of Grandfontain and was one of the first 24 companies/1200 soldiers to arrive in New France.

If Antoine was one of these 1200 soldiers as it is believed he may have been, he sailed out of La Rochelle in France, heading toward Quebec on 13 May 1665 aboard the L’Aigle D’Or captained by Sieur de Villepars and they arrived in Quebec on 19 August of the same year. The L’Aigle D’Or which would have been Antoine’s home for a full three months along with all the other men from his company and several other companies, was described as an “ancient and decrepit ship” about 300-400 tons in size.

Upon arrival in Quebec, Antoine’s company was dispatched to help build Fort Ste-Therese and also the road from the fort to Chambly. The company remained in Quebec through that winter of 1666. Exhausted from their sea crossing and the physical labor constructing the fort and road, we have to imagine that this was a tough winter for the men, as it was reported that 40 of the 60 men commanded by Hector D’Andigne, were sick that winter with scurvy.

While the soldiers had come to New France under orders, most of the other settlers were young men and women who had come to New France looking for adventure and opportunity. The vast majority of the population were young people in their 20s and 30s. In 1666, Antoine would have been about 30, and along with approximately 450 of his fellow soldiers, rather than returning to France, he remained in the colony. Perhaps Antoine too was attracted to the vast opportunities open to him in New France.

The next record we have of Antoine is on 26 August, 1669 when he married Marie Barbe Menard (she was known as Barbe), distinguished in history as one of the approximately 800 King’s Daughters (young women sent to New France under the financial sponsorship of Louis XIV of France, as part of the King’s program to promote settlement of the colony). We know this because Antoine and Barbe’s original marriage contract still exists. 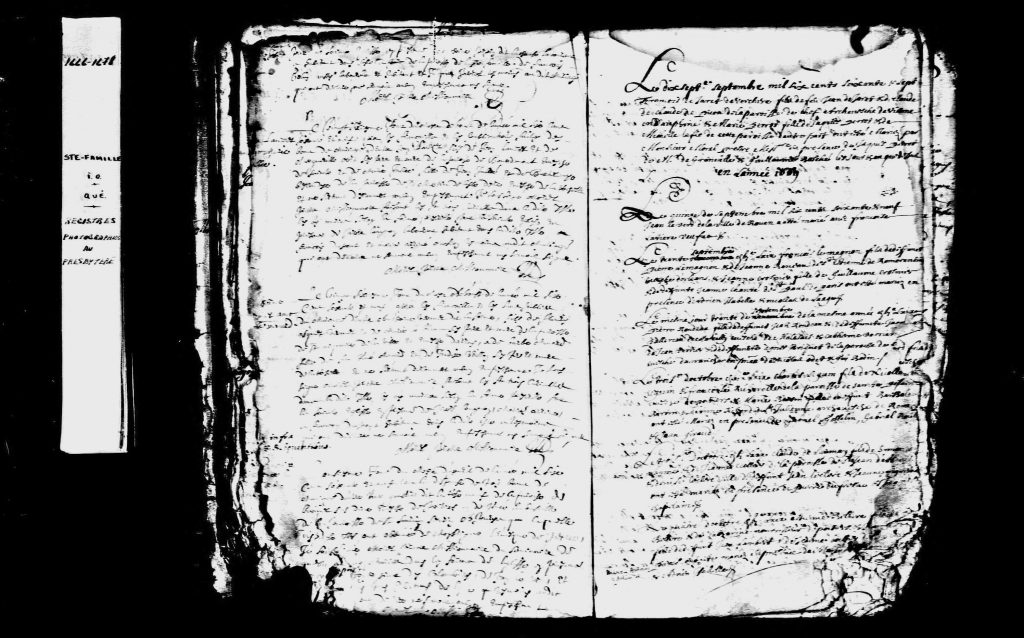 Born about 1653, Barbe was the daughter of René Ménard and Judith Veillon, from the city of La Rochelle, France. While Barbe eventually converted to Catholicism (Quebec was a Catholic colony and the practice of Protestanism was prohibited), she was born to Huguenot parents, followers of John Calvin. 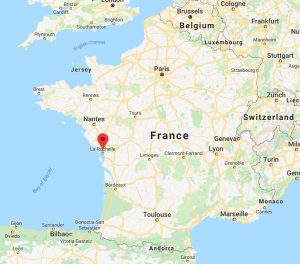 When she was just 16 years old, with a dowry personally promised by the King, Barbe emigrated to New France. The courage it must have taken for Barbe and all of the young Filles du Roi (King’s Daughters) to cross the sea, land in a frontier settlement that couldn’t have been any more different from the city she had come from, and then marry a virtual stranger is astounding. I am planning a future blog post about our many ancestors (both my side and Jim’s) who were among of the Filles du Roi women.

In 1669, the newly married Antoine and Barbe Vermet settled on 3 acres located on the borders of the parishes of Saint-Famille and Saint-Francois on the Ile d’Orleans, just off the coast of Quebec City in the Saint Lawrence River. Antoine is reported to have made his living as a farmer. Both Antoine and Barbe had come to the new colony from cities and it is overwhelming to think of how much they would have to learn and accomplish in the first few years after they married, in order to survive and flourish in the harsh new world they had chosen as their home.

Antoine and Barbe’s first daughter was born very quickly, on 5 June 1670. Together they had eight children, with seven surviving past childhood. The ancestor we are concerned with in this lineage is Pierre Robert Vermet born 8 April 1672 and he married Marie Madeleine Hans Bernard on 12 June 1703.

Noted as one of the 300 families that founded the island, in 1670 as they began a family, Antoine and Barbe must have felt very isolated and remote. Saint-Famille was the first parish to be established in 1661 and by 1684 there were still only 51 families and less than 400 people living there. Antoine’s land was said to be on the far reaches on the border of Saint-Famille, but was actually located in what became Saint-Francois with the founding of the parish in 1679.

As farmers, the Vermet family likely grew crops such as wheat, peas, oats, rye, barley, and maize. We know that on 5 February 1670, a local widow rented Antoine a cow for five years. The rent was 20 pounds for the first year and 25 pounds for each of the remaining years. This practice of renting livestock when one did not have the means to purchase their own seems to have been common in the colony. Many of the farmers in the area also kept oxen, a boar and sows, chickens, sheep, and sometimes a horse.

The work schedule would have closely followed the four seasons. Land had to be cleared for cultivation and then plowed (plowing was done in the fall since the spring season often came so late and they needed to plant immediately), wood chopped for heat, homes built and maintained, gardens sowed and tended, livestock cared for, and crops harvested.

Rural families such as Antoine and Barbe’s were often very close-knit as they had to work together cooperatively to produce almost everything they needed to survive. Surpluses were sold to provide the money they needed to purchase farm supplies and other household necessities. Antoine’s efforts must have been fruitful, because in 1682 he bought more land on the newly founded Saint-Francois for 150 pounds, from a Francois Garinet.

Although living rurally and remotely on the island, social activities were popular in the New France colony and we can surmise that the residents of Saint-Famille and Saint-Francois likely visited each other’s homes on occasion for socializing. Playing cards was especially popular in these times and board games such as checkers and an old form of backgammon called trictrac were also popular.

Sadly, Barbe died on 16 or 17 June 1685 when she was just 32 years old. She was interred in the Saint-Famille cemetery. Although no account of her death exists, her last two children were twins born on either the 16 or 17 of June 1685 as well, so we can surmise she died in childbirth or from complications after childbirth. Sadly, the unnamed female child died the same day or was perhaps a stillborn. The boy, Jean, appears to have lived as we find a marriage contract for him dated 1713.

Life must have been quite challenging for Antoine after his wife died. In 1685, his oldest child was only 15 and his youngest was the newborn Jean. The oldest son Pierre, our ancestor, was just 13 when his mother died. However, there is evidence that Antoine may have been struggling financially even before Barbe died. In 1684, he “committed” his then-14 year old daughter Marie-Anne to work for Etienne Landron, until she was married, at 36 pounds of wages the first three years and 50 pounds of wages for each of the remaining years. On 30 January 1685, six months before Barbe’s death, he committed his 11 year-old daughter Marie-Madeleine to work for this same Etienne Landron until she was ready to marry, for a sum of 30 pounds the first three years and 40 pounds for each of the remaining years. On 19 March 1688, his daughter Marguerite, 13 at the time, was committed to work for Louise Delestre for three years. While this is all the records tell us, it does sound as though Antoine “sold” his daughters into indentured servitude. Indentured servitude and even slavery were common and accepted practices in New France. However, I am not sure how common it was for a father to sell a daughter as an indentured servant. I will need to research this more.

His sons were kept at home with Antoine. This is not especially surprising as he would have needed the physical labor of his sons to help him run the farm.

The ancestors of Antoine Vermet-dit-Laforme and Barbe Menard have spread all over Canada and the United States. Our particular branch currently lives in the New England area of the U.S., about 300 miles South of the Ile d’Orleans.

The photo at the top of this post is a photo of Jim, Antoine Vermet’s 9th great grandson, during a 2016 visit to the Ile d’Orleans, pointing to the location of Antoine and Barbe’s farm. 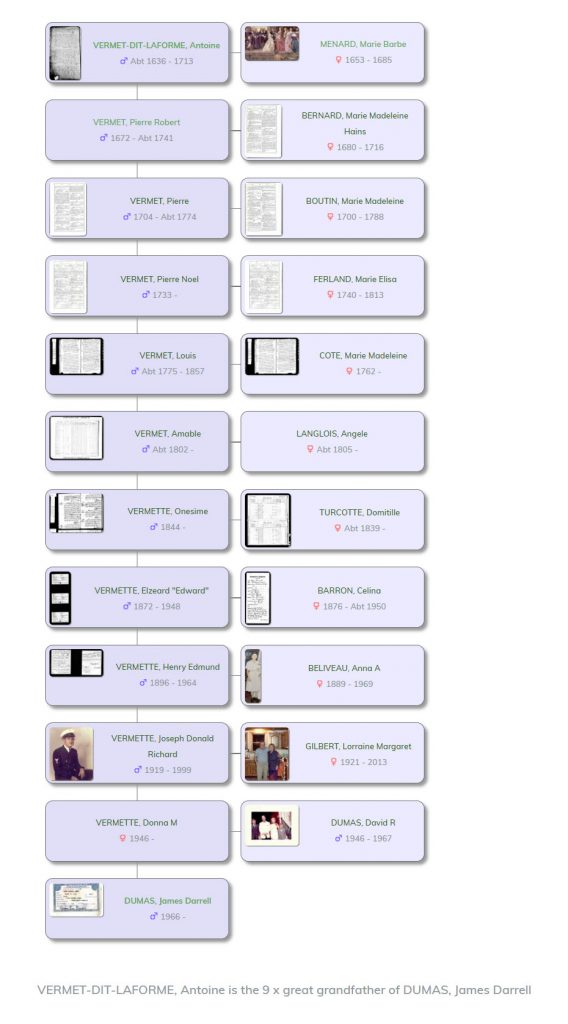