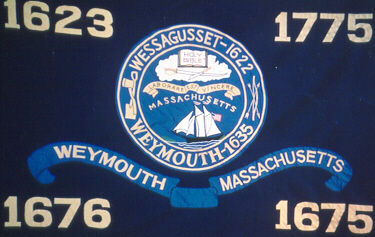 Wessagusset Colony was the second English trading colony established in Massachusetts, settled in August 1622 by colonists in a move that had been coordinated by Thomas Weston. Thomas Weston was a London merchant who had been involved with funding for the passage that allowed the group we know as the “Pilgrims” make the lengthy trip and settle Plymouth Colony.

Thomas Weston’s primary goal for the new Massachusetts colony was profit, through timber, fish, and skins that the colonists would send back. He believed that family responsibilities would interfere with this goal, so for Wessagusset Colony he selected only young men. The entire colony was comprised of these 50-60 men, an advance team of several men, plus one surgeon and one lawyer. Our ancestor, Edward Johnson was a part of the small advance team. Edward Johnson is my 11th great grandfather on my maternal side.

Edward was born about 1593 in England, although his exact origins are unknown. With the other advance team members, Edward traveled to the New World on the Sparrow, an English fishing vessel that brought the team to Damariscove Island, just off the coast of Maine. They then traveled the additional 150 miles by shallop and arrived in Plymouth Colony in May 1622. After a brief stay in Plymouth, the advance team set out to scout the coast. When they found the site for the future colony, a place the natives called Wessagusset, they negotiated for the land with Chief Aberdecest and prepared for the arrival of their fellow colonists.

Led by Richard Greene, Thomas Weston’s brother in law, the main group of Wessagusset colonists arrived in Plymouth in late June of that year. These young men were not prepared for harsh reality of forging a new colony, and had no idea how to take care of themselves. While they stayed in Plymouth only a short time, it was enough time for them to stir up trouble, and before long the people in Plymouth began complaining that the new colonists were stealing from them. By the end of September the new Wessagusset Colony had been established, and that is when the real trouble began.

It was already late fall and the men had failed to create a storehouse of food for themselves, to get them through the winter, and quickly went through the food stores they had brought with them. While they built shelter for themselves, they were short on all other provisions and were unprepared with the skills needed for the hunting, planting, or fishing that would be required of them.

As Wessagusset Colony moved into the winter season, the men began to starve. Some of them did join the Plymouth colonists for some foraging and trading expeditions which helped, but the supplies they got from these endeavors ran out quickly and while they were still deep in the cold winter. Richard Greene had grown ill and died by the end of November and John Sanders assumed leadership and was named “governor” of the colony.

With their situation dire, the men turned to the local Indians for corn, trading blankets and clothing plus their services as laborers. Ten more colonists died in the upcoming month, and then, some of them, desperate and starving, began stealing the corn from the Indians. The Indians complained and appealed to Plymouth Colony about these new colonists and their thieving, but the leaders in Plymouth had no authority, and could only rebuke them. When one of the men was caught stealing, the problems quickly escalated and the Indians demanded punishment for the thief.

Our ancestor, Edward Johnson sat as the judge and authorized the hanging of the thief, in sight of the Indians, so they would know justice had been done. However, there is a legend that the colonists, already starving and weakened from the harsh winter, selected the weakest among them, an innocent already close to death, and hanged him in the thief’s place. There is disagreement, however, about whether this is a true story or simply a legend, as most accounts indicate that at the last moment, the actual thief was hanged.

Tensions continued to rise among the Indians and the colonists, both at Plymouth and Wessagusset. There had been a massacre in Virginia not long before, and news of it had reached the settlers, causing them to be more wary and distrustful. Likewise, the Indians were becoming increasingly hostile to the settlers, and there were reports of their farm animals being killed and other threatening acts. 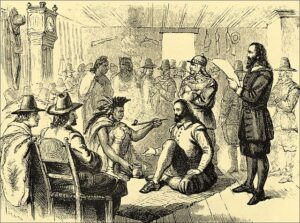 Edward Johnson may have** played another key role in history at this point when it has been reported that recognizing the signs of hostilities, he fled to Plymouth to warn them of an imminent attack. This warning was reinforced by Wampanoag chief Massasoit’s warning to Edward Winslow (a senior leader in Plymouth who had befriended Massasoit) of a conspiracy among several tribes against Wessagusset and Plymouth. In response, Myles Standish led a small force to Wessagusset, arriving on March 26, 1623. (**note: I wrote he “may have” because some accounts credit Phineas Pratt for this act.)

The next day, several Indians, including chief Pecksuot of the Massachusett tribe, came to Wessagusett at Standish’s bidding. There are several different historical accounts, so it is hard to know exactly what happened. However, we know that four of the Indians were alone in a room with Standish and several of Standish’s men. It has been suggested that this was a setup by the Indians who had planned to kill Standish. Most accounts seem to indicate that it was Standish who had arranged this and that he had lured them in under peaceful pretenses. Regardless, what happened next reverberated for generations. Standish gave the order to attack and killed chief Pecksuot himself. All the visiting Indians in the village were killed except for one who escaped, and at least 5 colonists were killed, as well. One of the Indians was decapitated and his head was displayed on a post in Plymouth as a warning.

After this violent battle, Wessagusset Colony disbanded. Many of the survivors returned to England, others stayed to join Plymouth, and a few sailed up the coast to settle in Maine. Whether it was at this time or later, this is where we next find Edward Johnson in 1631 where he was admitted in York, Maine as a Freeman.

By 1646 (when their first child was born), Edward had married Priscilla who we know was born about 1618. Unfortunately, we do not know her maiden name or origins. Edward shows up in the historical record a number of times, buying and selling property, and holding various positions in York, such as Deputy, Commissioner, and Justice of the Peace. These roles, combined with the fact that Edward was able to sign his name, indicates that he was likely an educated man. Edward and Priscilla had two children together, Benjamin, their first born, and Deborah (born in 1653), from whom we are descended. Edward died January 9, 1689 at the age of 94, having lived an extraordinarily long life for the times.

Newly widowed, Priscilla lived through what is known as the Candlemas Massacre on January 24, 1692, when a Penobscot chief, during King William’s War, led between 200-300 natives into the town, burning buildings and killing settlers. At least 100 of the villagers were killed and another 80 were taken hostage. Priscilla, who was 25 years younger than her husband, died sometime between 1706 and 1716, again a very long lifespan for the times.

As for Wessagusset, by the summer of 1623, none of the original settlers remained. However, later that year, a new group of settlers led by Governor Robert Gorges, arrived in Plymouth with plans to resettle the village. Once again, after a single winter, the colony was abandoned in 1624, and most of the colonists returned to England. A few, however, remained and were slowly joined by more settlers until they finally joined the Massachusetts Bay Colony on 1630.

In 1635, another of our ancestors, Reverend Joseph Hull led 100 people from England and they joined the colony. On September 2 of that year, the town was incorporated and was officially renamed as Weymouth. Joseph Hull is my 11th great grandfather through two separate lines, one on my paternal side and one on my maternal side. He is a fascinating character worthy of his own story, which I will write in a future post.