Who Were The Parents of James Perkins From Rochester? 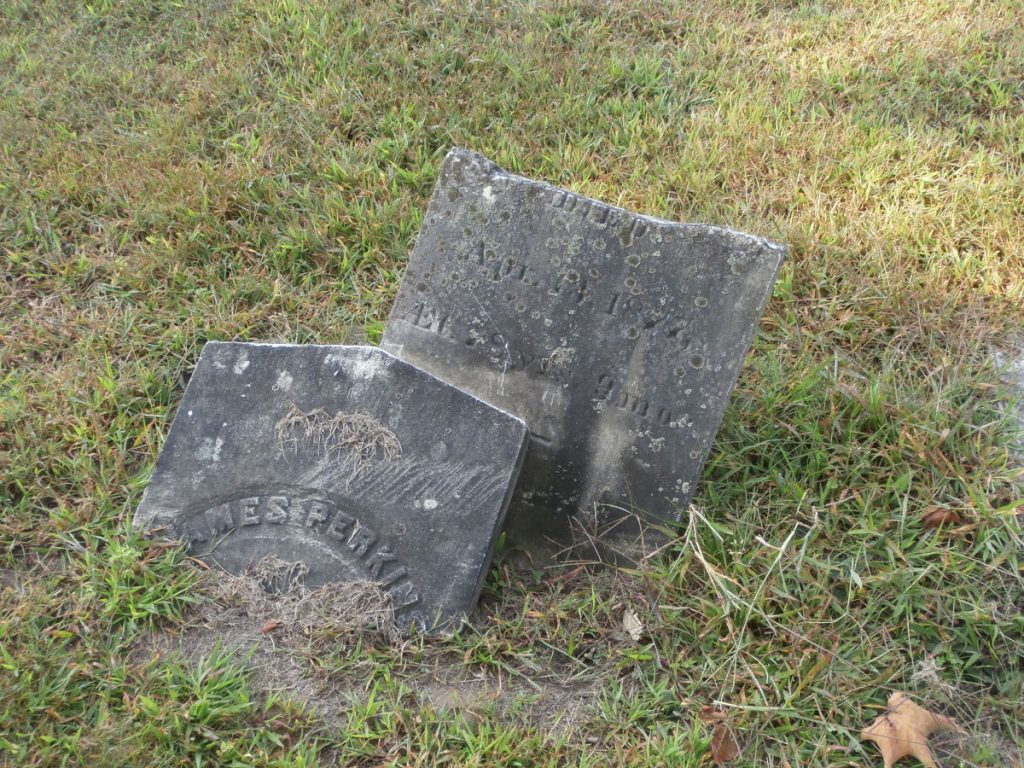 Determining the parents of James Perkins from Rochester, New Hampshire/Lebanon, Maine, is an enduring family mystery. James is my 4th great grandfather on the maternal side.  We believe he was born about 1801 and if the photo I’ve attached above is his gravestone he died in 1877 (the 1877 is clear on the broken and weathered headstone, the actual month and day are not as clear but it appears to be April 13). There were a number of other James Perkins in the area at the time, but none of them appear to be “our” James Perkins. Who were his parents? It is a mystery I have been working on for a number of years.

One family legend suggests that I will never find what I am looking for because it doesn’t exist. According to this legend, James Perkins was somehow connected to a local Penobscot or Abenaki tribe and that he may in fact be Native American or part Native American and had possibly changed his name to James Perkins to hide this fact and assimilate more easily into what was by that time, the dominant culture.

When I first began researching James, I quickly came upon this 2005 article from Genealogy Today which described the search of another family researcher who was tracing the lineage of one of James’ sons from his first marriage.  This researcher was also going in the same direction as me with her research, but still hadn’t found the answers to her questions. She too had come to the Penobscot/Abenaki connection. Of course, family legends are almost never fully accurate, but often contain a nugget of the truth. It is possible that this legend has some truth to it too, although I will note that my DNA shows no trace of Native American blood (but that doesn’t necessarily disprove anything).

What I do know: As listed in the Vital Records of Lebanon, Maine, James Perkins of Rochester was married to Miss Alice Hartford (aka Alice M. “Elsie” Shorey) on 13 Aug 1853.  This was the second marriage for Alice who was the widow of Lorenzo Hartford (1809 – 1850) Together, she and Lorenzo had 8 children, the youngest only 2 when Lorenzo died. This was also the second marriage for James who we believe was married to a Susan Downes/Downs. No death record has been found for Susan, but we can presume she died sometime between 1846 when her youngest daughter was born and 1853 when James married Alice (aka Elsie). James and Susan also had at least 8 children together. 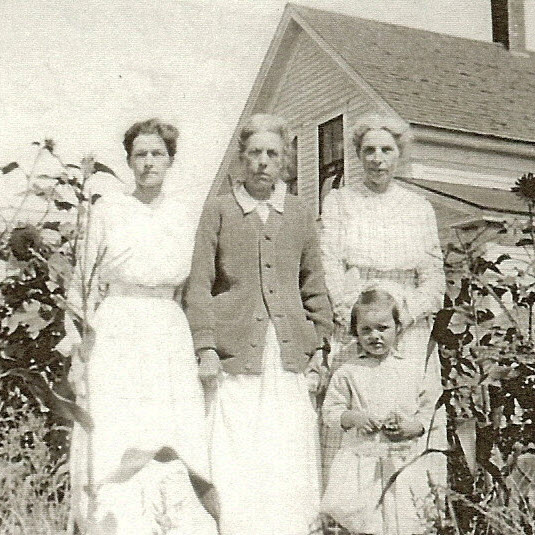 Angie Perkins is shown in the middle of two of her daughters in this photo (Alice Shorey and Flora Shorey). Her grandaughter Ruby Carpenter is in the front. The photo was taken in front of the family home on River Road in Lebanon, Maine.

After marrying,  James and Alice had one daughter together, Angelina “Angie” Perkins (1855 – 1940), my 3rd great grandmother. Angelina married her first cousin Hosea Edwin Shorey (1849-1904) in 1873 which explains why her daughters were Shoreys too…what a tangled web!

The location of James’ birth is confused by the fact that the records are inconsistent. Various records for the James Perkins married to Susan Downs have noted his birthplace as Rochester, NH and 3 towns in Maine: Lebanon, Augusta, and Hallowell.

In my search for our James Perkins’ parents, I investigated all the James Perkins living in the area at about the same time:

If James didn’t come from any of the families in the area where did he come from? 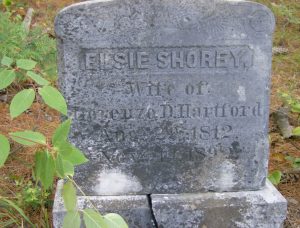 Is the gravestone in the Rochester cemetery even that of our James Perkins? It is possible that it isn’t. Although by process of elimination, it doesn’t belong to any other James Perkins living in the area at the time.

Another interesting tidbit: Assuming that James died in 1877 and the gravestone suggests, he and Alice had been married for 24 years at the time, more time than she had been married to Lorenzo (about 20 years). However, her gravestone gives her maiden name Shorey and also names her the “wife of Lorenzo D. Hartford.” There is no indication of a marriage to James Perkins. They are, in fact, buried in separate cemeteries. She is buried beside Lorenzo.

Confusing things further, there are two James Perkins with wives named Susan in the 1850 census. The first, living in Rochester, had a wife named Susan and two children. His occupation was listed as farmer.

Excerpt from the Rochester, NH 1850 Census

The second, living in Dover, was living with a wife Susan and 10 children. His occupation is listed as laborer. Both couples are approximately the same age and illiterate. The two children from the Rochester census were close but not the same ages of the corresponding children in the Dover census (Charles and George). The Dover Census was enumerated on August 21 and the Rochester one on November 7.

Excerpt from the Dover, NH 1850 Census

Are these two listings the same person?  Is it possible that they were enumerated in two different residences several months apart? But then where are the other children from Dover? Other than this 1850 census record, my research uncovered only one James Perkins in the area married to a Susan. But could there actually have been two? On the marriage record for James and Alice it specifies that James is from Rochester. Is it possible that family trees have mistakenly connected our James Perkins with the one who married Susan Downs and had 8-10 children? Could our James have had a first marriage to some other unknown woman named Susan with whom he had 2 children and was widowed by 1853 when he married Alice? This theory is beginning to seem much more plausible to me.

Also, if James Perkins married to Alice Shorey WAS the widow of Susan Downs, I have uncovered little evidence that the 8-10 children in question had any association with him after 1853 other than the fact that James Perkins (son of James Perkins and Susan Downs) and his wife and child were living in Lebanon, Maine in 1870, next door to OUR James and Alice.

Excerpt of the 1870 Census taken in Lebanon, Maine

During a 2019 trip to the New England Genealogical Society library in Boston, I spent hours pouring through published Perkins family histories. I was unable to locate even a trace of our James Perkins.

Discouraged, I searched the historical newspapers again.  I was shocked at what I found! 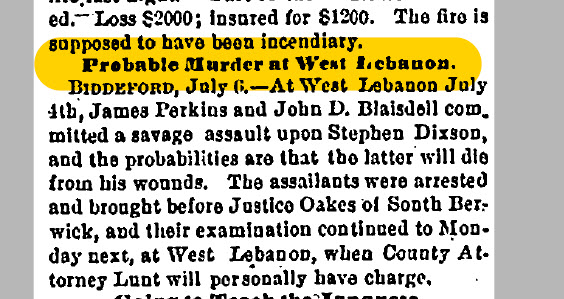 Could this be OUR James Perkins? The date of the article was a couple of months after his supposed death date, but as already mentioned, the date on the headstone isn’t completely clear; perhaps it reads August rather than April. But if James ended up in the criminal system, it could explain why I am unable to find a death record and it could also explain why his wife of 24 years seemingly disavowed him.

I still live just 15 minutes where James and Alice Perkins lived in 1877, and Portland is about one hour away by car. Even today, our local news is only reported in a cursory way in Portland newspapers. I decided to search the microfilm of more local newspapers during that time period and as I hoped I would, found a more detailed explanation. 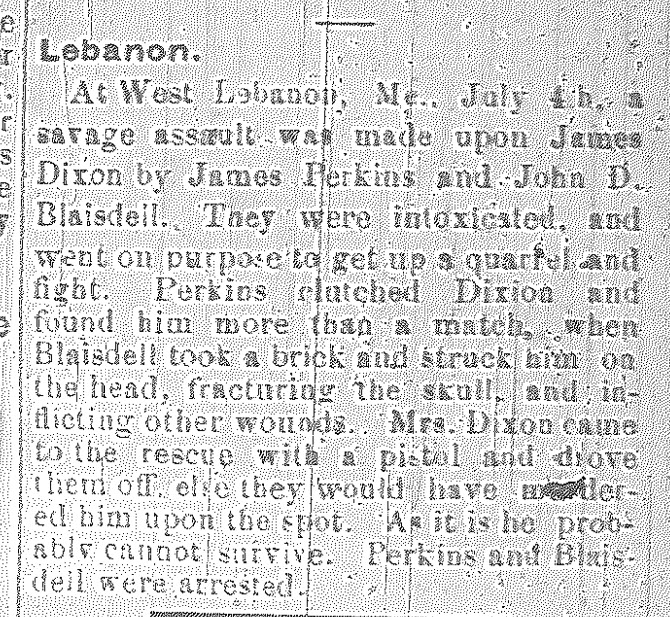 Unfortunately, the victim Stephen Dixson did die from his injuries shortly after.

Excerpt of the 1880 Census taken in Lebanon, Maine, enumerating James H. Perkins and his family.

Also by the 1880 Census, Alice was living in Lebanon with one of her sons from her first marriage, Eliakim Hartford.  She is noted as a widow, although keep in mind that nobody checks up on the reported facts. If she were embarrassed by a husband convicted of murder she probably wouldn’t admit to still being married to him, assuming he were even still alive.

Excerpt of the 188 Census taken in Lebanon, Maine

My next step on this trail will be to learn how to access the historical criminal records of York County, Maine. It is possible that the answers I seek will be found there. In the meantime, if you are reading this and have any information to share, please reach out. I would love to solve this one!