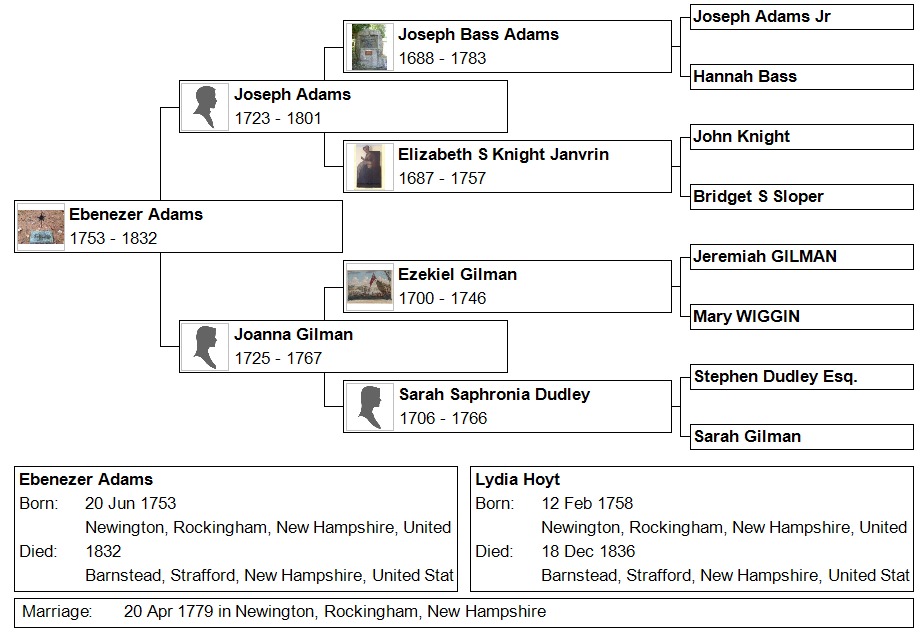 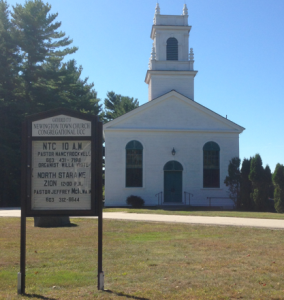 The Newington Town Church and meeting house was built in 1712-1713. Ebenezer’s grandfather was the first minister here, the Reverend Joseph Adams. It is one of the oldest Congregational churches in the nation still in continuous use. The bell was recast by Paul Revere himself in 1804.

Ebenezer Adams was born on 20 June 1753 in Newington, New Hampshire, the third son of Dr. Joseph Adams and Joanna Gilman. He had six brothers and two sisters.

While no records have been found regarding Ebenezer’s early life, we do know that Newington was a small, close-knit agricultural town in which his grandfather, Reverend Joseph Adams, the first minister of the Congregational Church in Newington and the uncle of the then-future President John Adams, was highly respected.

The first school house had been built just before Ebenezer’s birth. When Ebenezer was school-aged, in 1762, Capt. Hercules Mooney was the school master. It was this same Capt. Mooney who was famous for his leadership and bravery in the French and Indian War several years previous and then later in the Revolutionary War.

Ebenezer’s grandfather and father were both Harvard graduates, but no record has been found of any higher education completed by Ebenezer. The next historical record located for Ebenezer was in November 1775 when he enlisted for two months during the build-up to the Revolutionary War.  For those two months he served at Fort Ticonderoga and Crown Point which had been captured by the Green Mountain Boys led by Ethan Allen and

Then for a second time, in August 1776, Ebenezer enlisted in the Continental Army at New Castle, New Hampshire under Capt. Abraham Perkins and Colonel Pierce Long, in the New Hampshire Line. This time he served as a sergeant for 12 months. 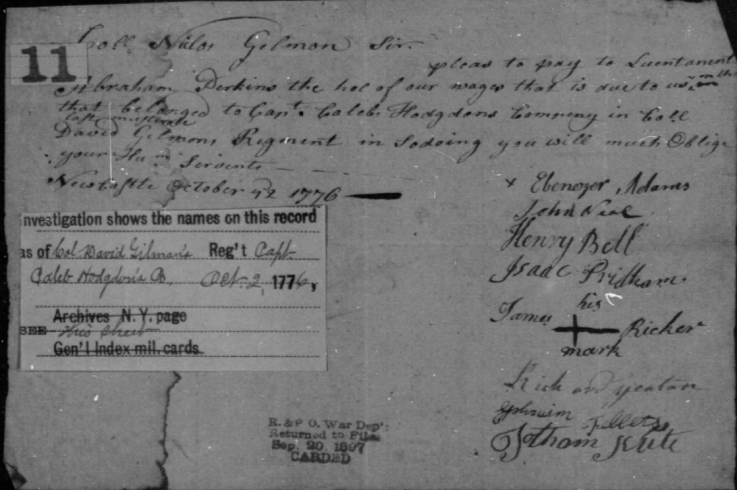 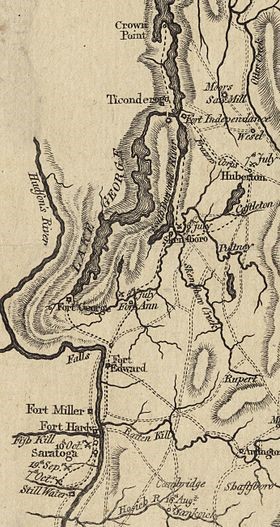 During his service, Ebenezer was in the battles of Fort Anne and Skenesboro. The battle of Fort Anne was fought on 8 July 1777. On the night of July 5-6, the Continental Army forces that had been occupying Fort Ticonderoga were ordered to evacuate in anticipation of the approach of General John Burgoyne’s army. About 600 men, most of them from New Hampshire under Colonel Long’s direction, sailed up the lake in a flotilla of 5 armed galleys and 200 smaller boats loaded with the sick and wounded from the fort, as well as stores, supplies, and armaments. They headed toward Skenesboro. Burgoyne quickly broke through the water defenses that had been set up by the Continental Army and pursued the withdrawing troops. The Americans arrived in Skenesboro only two hours before Burgoyne and were taken by surprise as they were portaging around the falls. Burgoyne fired on them and the Americans were forced to retreat; the pursuit and attacks continued overland until they reached Fort Anne where they were met by 400 New York militia. With the advantage of numbers now on their side, the Americans attacked. The battle lasted more than two hours, until both sides were almost out of ammunition.  Finally the Americans successfully surrounded the British position. But then the Americans retreated when they heard war whoops that they though meant British reinforcements were coming (they weren’t—it was just a single British soldier who had grown impatient and let out a cry). 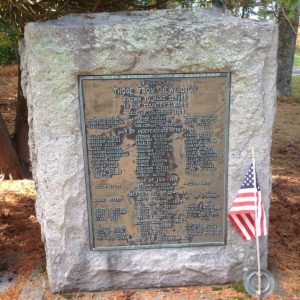 Memorial in Newington for soldiers from the town who served in the wars. Ebenezer’s name is the second listed for the War of Independence.

Both sides claim victory in the battle. This battle is also known in history for an unproven claim that a flag flown at Fort Anne was the first instance of a flag with the stars and stripes being flown.  Ebenezer was discharged at Stillwater, New York in August, 1777 and returned home to Newington.

On 20 Aril 1779, at the age of 26, Ebenezer married Lydia Hoyt also of Newington. Lydia was 21 and the daughter of John Hoyt and Sarah Furber. Lydia’s family had already been in America for five generations and her ancestors were among the first settlers to and founders of Amesbury, Massachusetts.

Although an exact date is unknown, shortly after marrying, Ebenezer and Lydia moved to Barnstead, a town which Rev. Joseph Adams had helped establish and in which the Adams family had significant land holdings. Many years later, in the deposition Ebenezer gave in order to qualify for his pension, he described his home, farm, and assets: 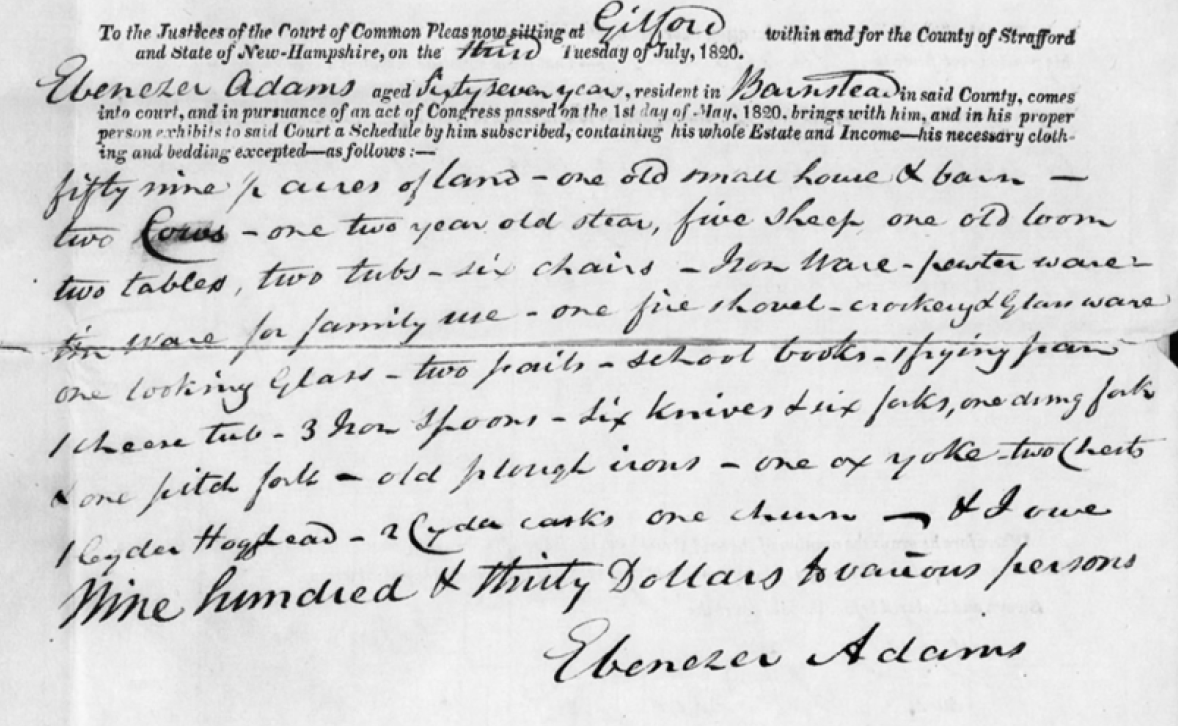 On 5 Aug 1823, after his pension had been denied due to having too much property, Ebenezer testified that he lost everything to his debtors and now owned no more than $50 of property. Now, all he had left was: 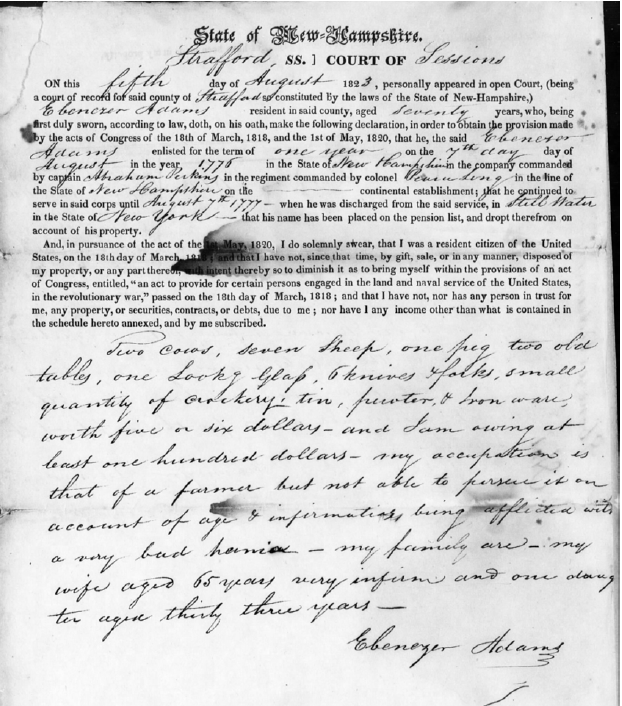 He further went on to explain that he was a farmer but was not able to pursue his occupation due to a “very bad hernia.” His wife, aged 65 and “very infirm” and his 35-year old daughter were living with him. He also testified that he had sold his 59-1/2 acre farm to Harrison Hoyt Adams for $450 and the money had gone to pay his debtors, but then the farm was sold to James Adams (possibly Ebenezer’s son, but he is not identified as such). A number of the people in town also testified on his behalf. Among these were: John Bickford, Abraham and Daniel Bunker, John Daniels, Reverend Enos George (pastor of the Congregational church in town of which Ebenezer was a member), Jeremiah Jewett, John and William Nutter, John Peavey, and Joseph Tasker. As a result of all of this testimony, Ebenezer was restored to the pension rolls. 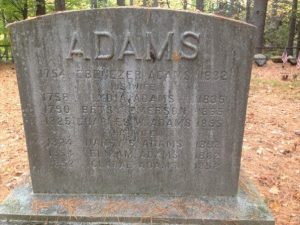 Ebenezer appears to have been a respected member of the community in Barnstead, even serving as a Selectman at times. But we can infer from his troubles later in life that Ebenezer and his family were never wealthy and may have struggled financially. Even earlier, in the 20 July 1817 edition of the Dover Sun newspaper, Ebenezer was listed as owing $65 in past due taxes, and his farm was set to be auctioned if they weren’t paid. Ebenezer’s son Ebenezer Jr. (also our direct ancestor) was listed in this same paper as owing $81.50 in back taxes.

Ebenezer and Lydia raised 7 children together, all born in Barnstead: 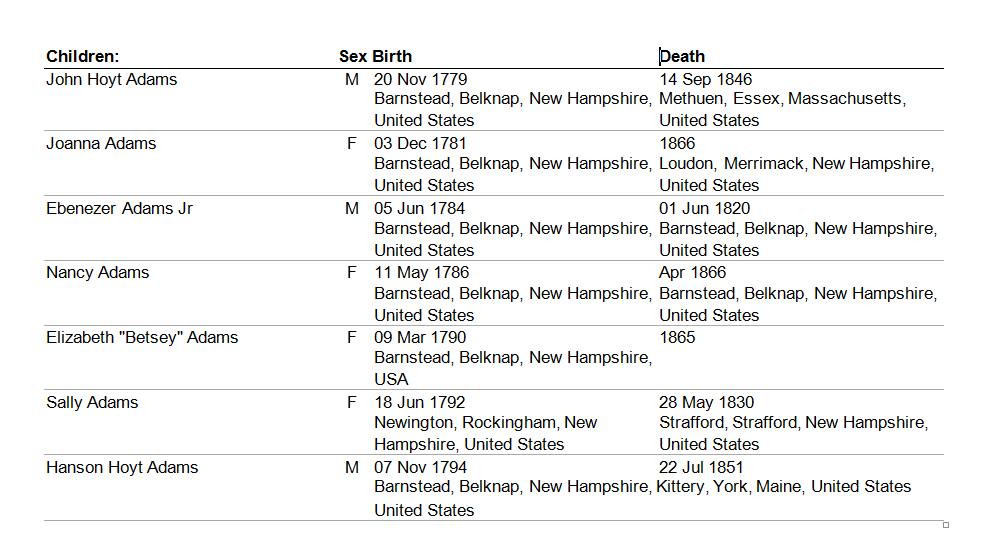 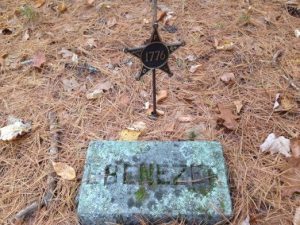 Ebenezer died in Barnstead in 1832, collapsing on the walk back to his home from the fields. Lydia died several years later on 18 Dec 1836. Both are buried in the Adams Family Cemetery in Barnstead which is located off Province Road. There is a Boy Scout camp on the property today, overlooking Adams Pond, and many of the facilities in the camp are named after the Adams family.

Across the road from the burial plot are the remains of an old stone foundation. This may have been the site of Ebenezer and Lydia’s home.